Weathering the Storm: Developing a Canadian Standard for Flood-Resilient Existing Communities (January 2019):  by Natalia Moudrak and Dr. Blair Feltmate. This report outlines a range of solutions that can be deployed practically and cost-effectively within communities to reduce flood risk. It also introduces a new prioritization framework for selecting areas within communities that should be targeted for retrofits. The report will inform the development of a new National Standard of Canada. 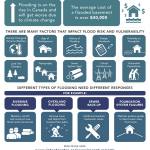 This infographic summarizes the key findings of the report, “Weathering the Storm: Developing a New Flood Risk Standard for Canadian Communities”.

Against the backdrop of unavoidable climate change, the need to limit this risk will only grow. In an effort to alleviate future flood risk, a new report from the Intact Centre on Climate Adaptation, University of Waterloo, highlights a range of solutions that can be deployed practically and cost-effectively within communities and households.

This report was supported financially by the National Research Council of Canada, the Standards Council of Canada and the Intact Financial Corporation, with the objective to fund the development of a National Standard of Canada by SCC-accredited standards development organizations. It features a unique framework for screening flood hazards and vulnerabilities to select areas within communities that should be targeted for flood-resiliency retrofits – a result of an extensive, year-long consultation with municipal experts, engineering consultants, conservation authorities and industry representatives from across the nation.

“Extreme weather caused by climate change is both a societal issue and an economic priority – there is a role for all of us to play in building a more resilient society. The Intact Centre “Weathering the Storm” report provides Canada with clear, practical steps to protect our communities against flood damage. Being resilient means adapting to our new climate reality – build in the right place, build right the first time, and build back better,” said Monika Federau, Chief Strategy Officer at Intact Financial Corporation.

Titled Weathering the Storm: Developing a Canadian Standard for Flood-Resilient Existing Communities, the report includes such measures as:

As extreme weather becomes more severe and frequent due to climate change, every effort must be made today to better protect existing communities from future damage and destruction. This aligns well with the climate commitments made by Canada as a signatory to the Paris Agreement, the United Nations’ Sendai Framework for Disaster Risk Reduction, and the Pan-Canadian Framework on Clean Growth and Climate Change.

“The Standards Council of Canada (SCC) is leading the way in recognizing the impact of flooding and by working with the Intact Centre on Climate Adaptation, and our accredited standards development organizations, SCC is laying the foundation for a new national standard that will ensure flood resilience in Canadian communities. This collaboration is another example of how standardization strategies can strengthen Canadian infrastructure against climate change—and protect vulnerable communities across the country.” Chantal Guay, CEO of the Standards Council of Canada

“The National Research Council is committed to the continued support of partners like the Intact Centre on Climate Adaptation; the Canadian Commission on Building and Fire Codes; and standards development organizations. This support ensures that climate change adaptation and resiliency measures introduced into Codes, standards and guides are based on the latest science and research to protect Canada’s critical infrastructure, homes and buildings, providing a safer environment for all Canadians.” Philip Rizcallah, Program Director, National Research Council of Canada